Click G+ to Inform this article to your friends
Tamilnadu Plus Two Results 2015 Published Now - Check Soon . The Tamilnadu 12th result 2015 is expected by arround 9 lakh students through out Tamilnadu. The official websites for checking Tamilnadu Plus Two Exam 2015 Result is

16-03-2015 : Plus Two Answer sheets Valuation Work starts today.  Tamilnadu Plus Two / 12th March 2015 Paper valuation is conducted in 66 paper valiation centres through out Tamilnadu. Around 40,000 teachers are to be involved in the paper valuation work. 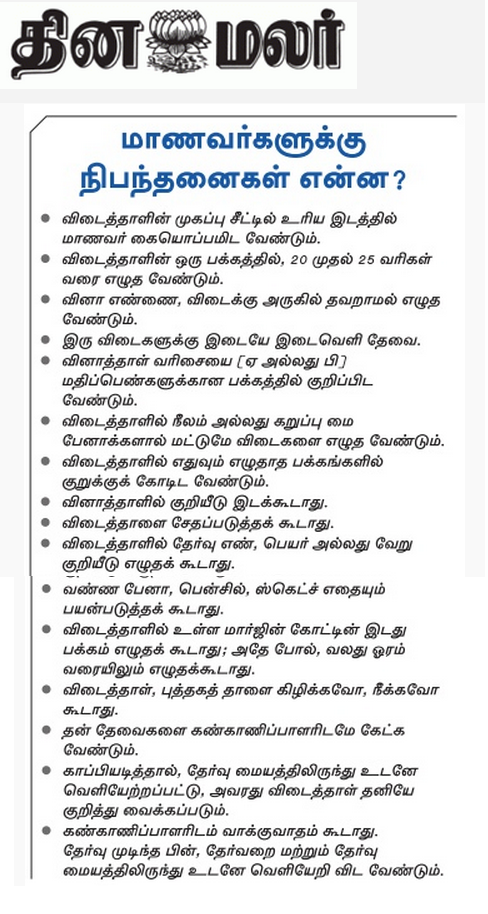 20-02-2015 :  Plus Two Exam March 2015 Paper Valuations to be started from April and the Result may be published in May 2015 - Director of School Education has informed.
Source : Dinakaran News, http://www.dinakaran.com/Latest_Detail.asp?Nid=132782

When to apply in Tatkal Scheme ?

The TNDGE has informed the candidates who still not applied can be given yet another chance to apply in Tatkal Scheme . They can apply from 5-2-2015 to 7-2-2015

26-11-2014 : 95 % Target for 2015 SSLC / 12th Public Examination - Honourable Minister for School Education. In a official meeting of school education department held at Anna University, the Minister has informed that Success Percentage in the upcoming public exam should be 95% for both 10th and 12th Public Exam 2015 .  News source : தி இந்து, 26/11/14

19-11-2014 : Total number of pages in the answer sheets to be reduced in the  Tamilnadu 12th Exam March 2014 . Considering the huge waste of papers in previous year Plus two exams, the Directorate of Government Examinations (TNDGE) has decided to reduce the number of pages in 12th public exam answer sheets.  The proposed Changes are as follows

Visit www.tndge.in or you can get the details from DEO or CEO Offices.

For news regarding this notification see dinathanthi newspaper , dated 08-11-2014

To see the Original notification in Tamil visit http://www.tndge.in/