Most Useful Revision Techniques for your exam preparation | Study Tips-9

Dear  friends , today I want share a new and most efficient revision technique called "Frequent Revision Technique (FRT)" . I myself benefited from the technique and want to thank the inventor of this technique, he is Dhaval Bathia , the author of the best selling book "How to Top Exams and Enjoy Studies".

In short, Normal Revision Technique according to Dhaval Bathia is that "we study and as time passes by, we forget and so we study again and again". 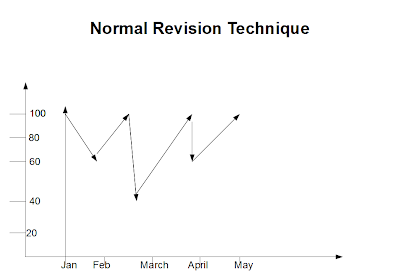 Jack is a student. He studies History Subject on January 30th and get satisfied with his studies. After studying for 5 hours, his memory level is100%.

After one month on 28th February he again studies the same portion from history subject, he could remember only 60% of facts. So he had to study for 2 hours to keep it 100%.

Again, one month later Jack studies the same portions he could only remember 40%. So he had to study for 3 hours to make his memory level 100%

You can understand from the above example that, in NRT  method, when the time passes by, a student losses his memory level of a subject and so he has to spend more time to rebuild the memory level again and again.

The only secret in the Frequent Revision Technique (FRT) is the single word "Consistency". 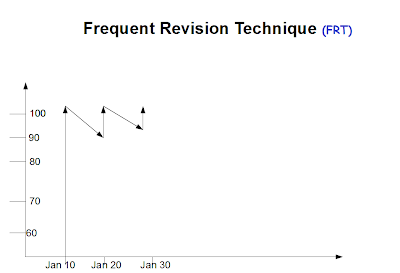 In short, FRT emphasizes you to study frequently not more than 10 days gap. More frequent you study, you save the energy and time.

Here too, student Jack is the example. Jack came to know about the Frequent Revision  Technique and follows the principle of consistency. He studied History on January 10th and achieved 100% memory level.

According to his study plan he had study time for history on  January 20th, he tests his memory level it was 90 %. He spends only 10-20 minutes for restoring that to 100%.

Again he got time to study history on January 30th, he find he had 95% of memory level. Now he spend less that 10 minutes to restore his memory to 100%.

Are you ready to practice FRT ? Some tips for you ...

Your revision gap should not exceed 7-10 days to prevent loss of memory level.

Have a revision plan as same as the study plan. Make sure that your revision plan should go parallel with your study plan. It means that when you sit to study for History, you should not forget revision of the previous lessions.

If you spend 1 hour for a particular subject. Allocate 10-15 minutes for revision.